Warning: Use of undefined constant PHD_CLIENT_IP - assumed 'PHD_CLIENT_IP' (this will throw an Error in a future version of PHP) in /home/justab8/public_html/wp-content/plugins/wp-mediatagger/mediatagger.php on line 2874
 Magic Bar Pie | Just About Baked 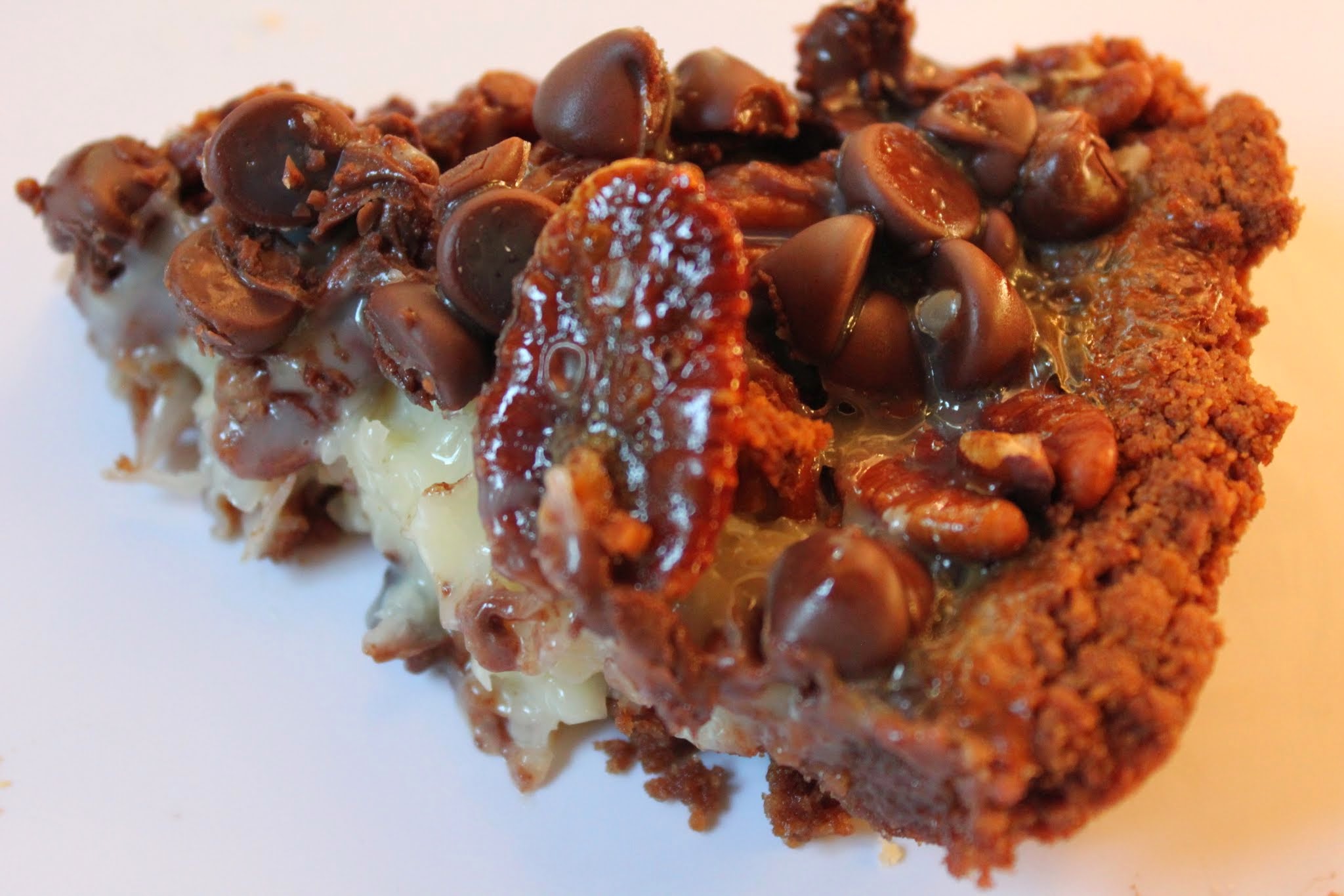 There’s a bakery chain in the DC area called Firehook. They sell a lot of good stuff, to put it mildly. I used to pop in for soothing cups of tea and baked goods on long cold walks from my condo to grad school. I was not a fan of grad school, and it seems like sugar always helped me out with that.

In those long-ago days, I pretty much always hoped to find a big chocolate chip cookie behind the glass cases at Firehook. They were so good. I still think about those big cookies! But one day, I saw a big bar wrapped in plastic. It was called a seven-layer bar, and I’d never heard of that before. Don’t think I’m oblivious. It was like thirteen years ago!

When I tried the bar, I couldn’t believe all the fun packed into that one square! Coconuts and pecans and chocolate chips, all atop a fantastic graham cracker crust. I later learned that this concoction is also known as a Hello Dolly or a Magic Bar, and you know, I preferred the latter name. Those bars taste like magic!

There aren’t seven layers, anyway. That’s a total misnomer. What’s magical about the whole idea is that a simple little can of sweetened condensed milk resuts in the gooeist result ever. So I got to thinking about that, and guess what? I figured a pie would be even better. All of that amazing stuff packed into a smaller space, and in pie form? It had to be a good idea! 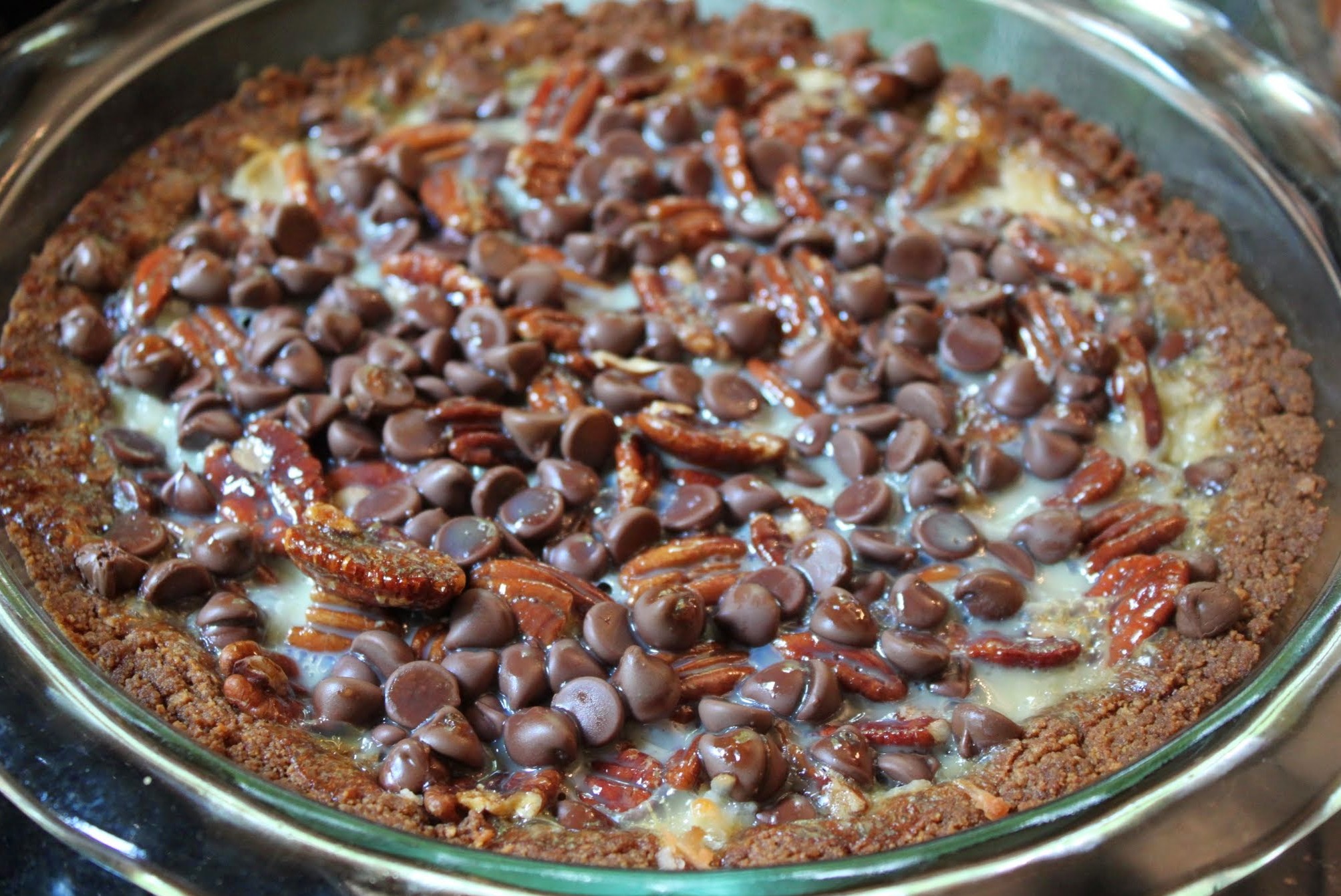 And it was. This pie came out as a cross between a pecan pie and a magic bar, and it was so easy to make. Despite the fact that the pie packs a serious sugar punch, I still saw people taking more than one slice. That speaks for itself. 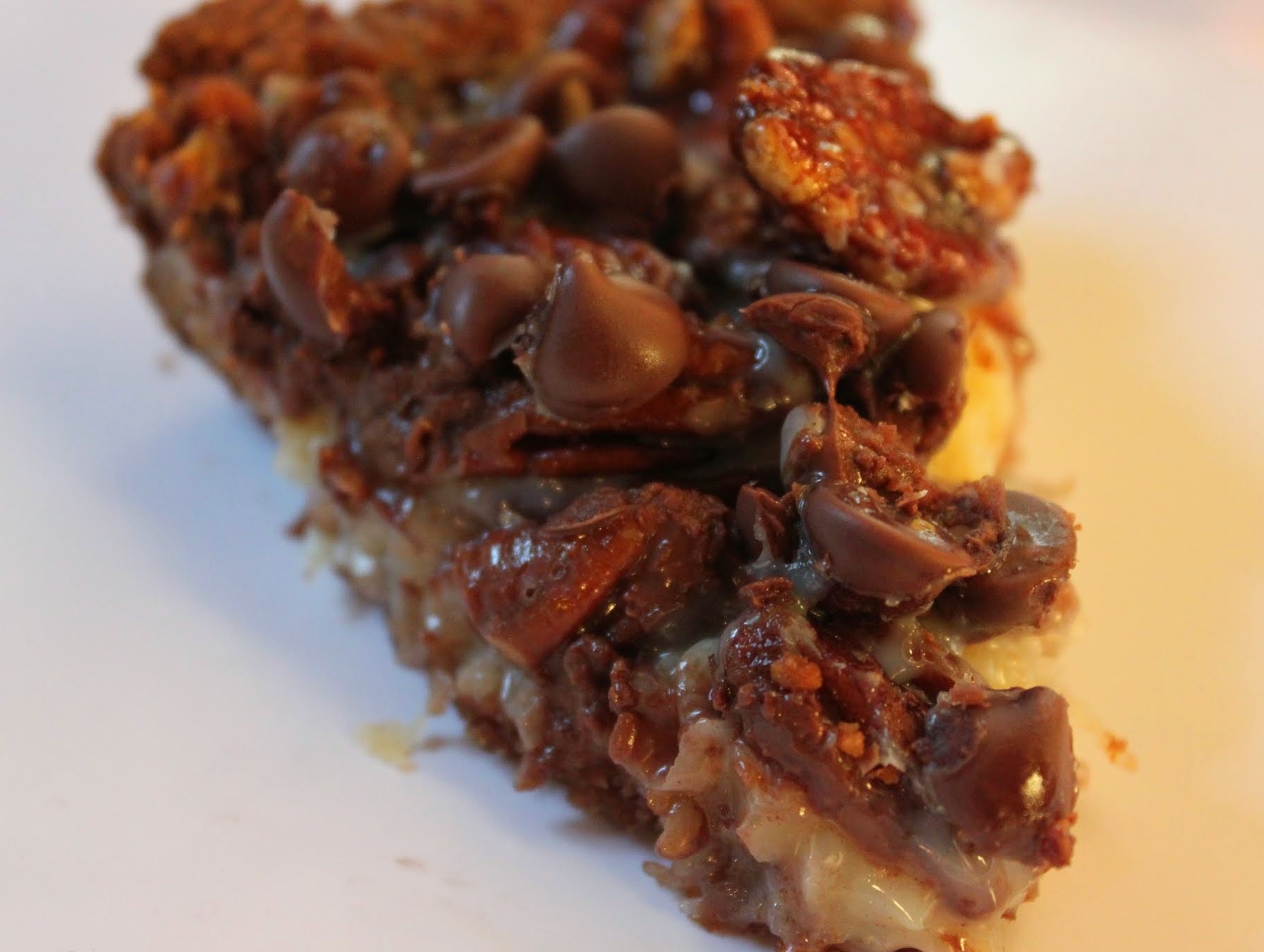 So if you’re a whiz with magic bars, or even if you’re not, this is a good pie to take to your next whatever. People will be impressed because they’re always impressed when a homemade crust is involved, and you can once again save the day! 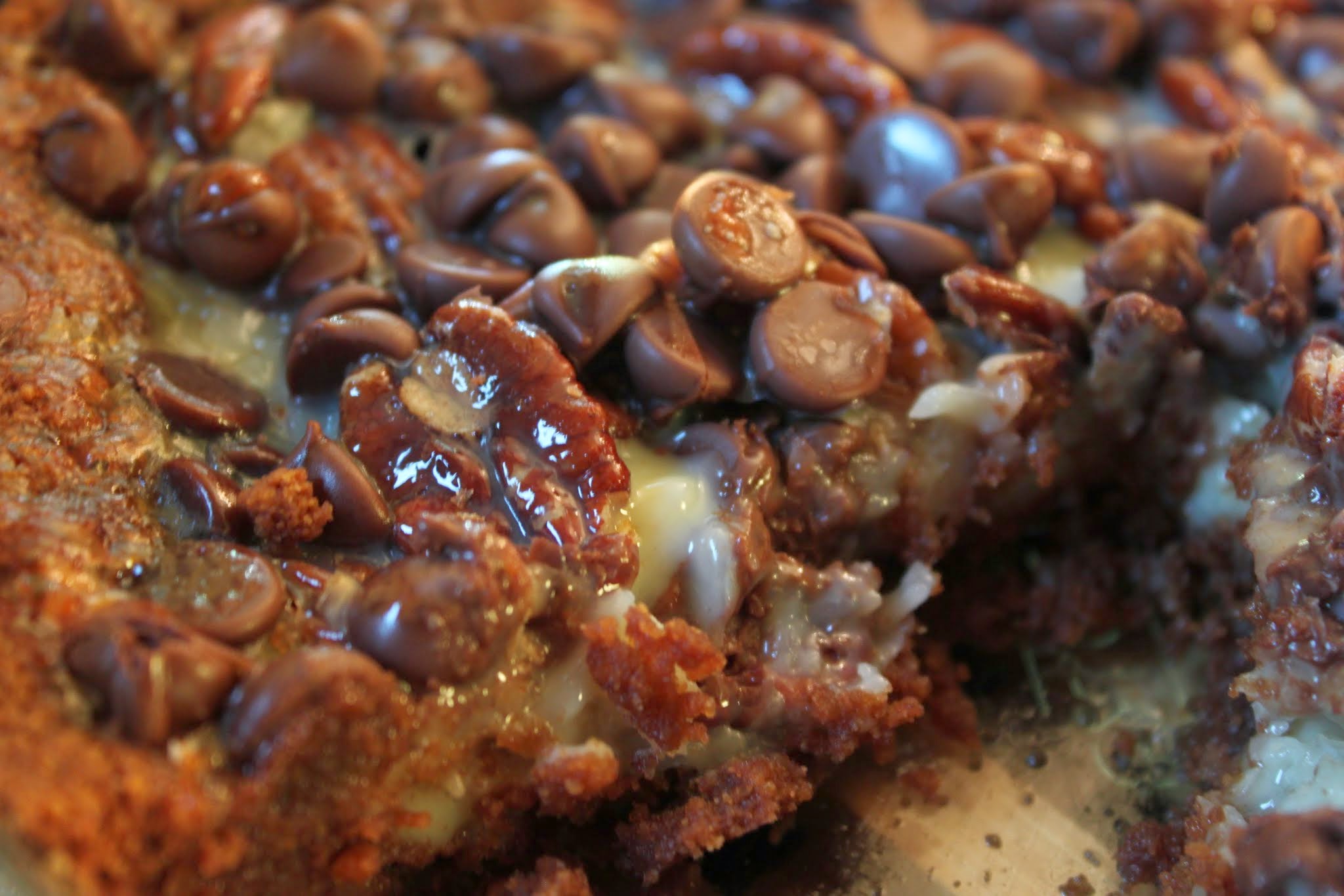 Besides, you have to make this. It’s magic. Don’t mess with magic.

Preheat the oven to 350. Coat a pie plate with cooking spray.

In a microwave-safe bowl, melt the butter and chocolate chips for about one minute. Stir until melted and well combined. Add the graham cracker crumbs and brown sugar, stirring again until the mixture is crumbly. Press the crumbs into the pie pan, moving them up the sides to make a pie crust. Bake for 5-10 minutes until set and then remove from the oven.

Layer the pecans, coconut and chocolate chips into the pie crust, in that order. Pour on the sweetened condensed milk.

Bake for 25-30 minutes until the pie is bubbly and browning at the edges. 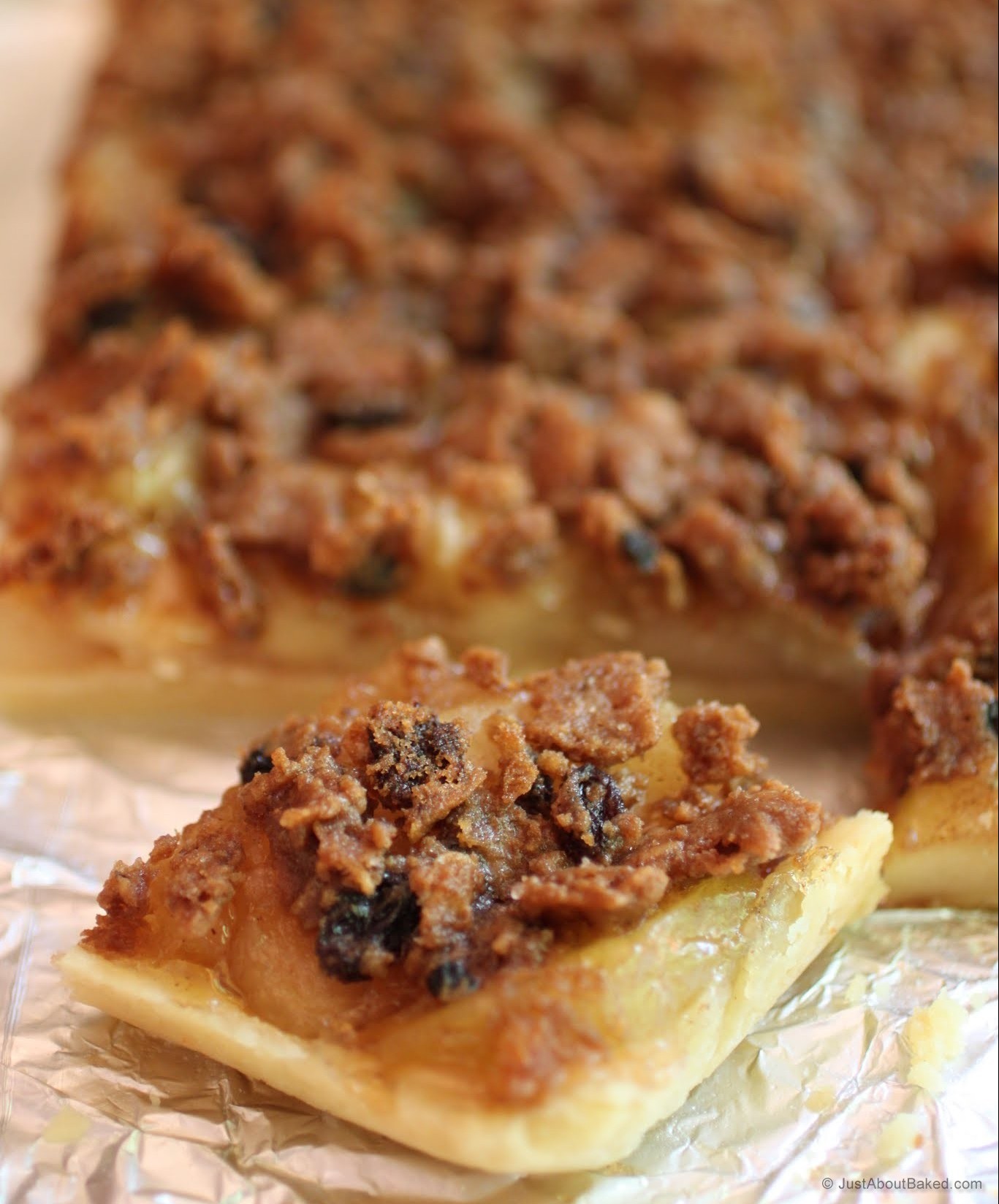 As it turns out, you can make pretty much anything with cookie chips. Who knew? I mean, I knew they were addictive, but versatility is also a huge plus.

Apple pie has always been a little bit of a seasonal question mark for me. It comes out at Thanksgiving, so that would suggest that it’s an autumnal food. But then it also comes out for summer potlucks, and that makes it…summer food? Instead of remaining confused, I’ve decided that apple pie is American, delicious, and year-round.

Slab pie is even better. That’s when you bake pie into a square or rectangular pan instead of a pie plate. Nothing is more satisfying than a lovely rectangular slab of apple pie. That is, of course, unless you up the ante. This apple slab pie is covered in Hannah Max oatmeal raisin cookie chips crumble, and it’s impossible to stop eating. 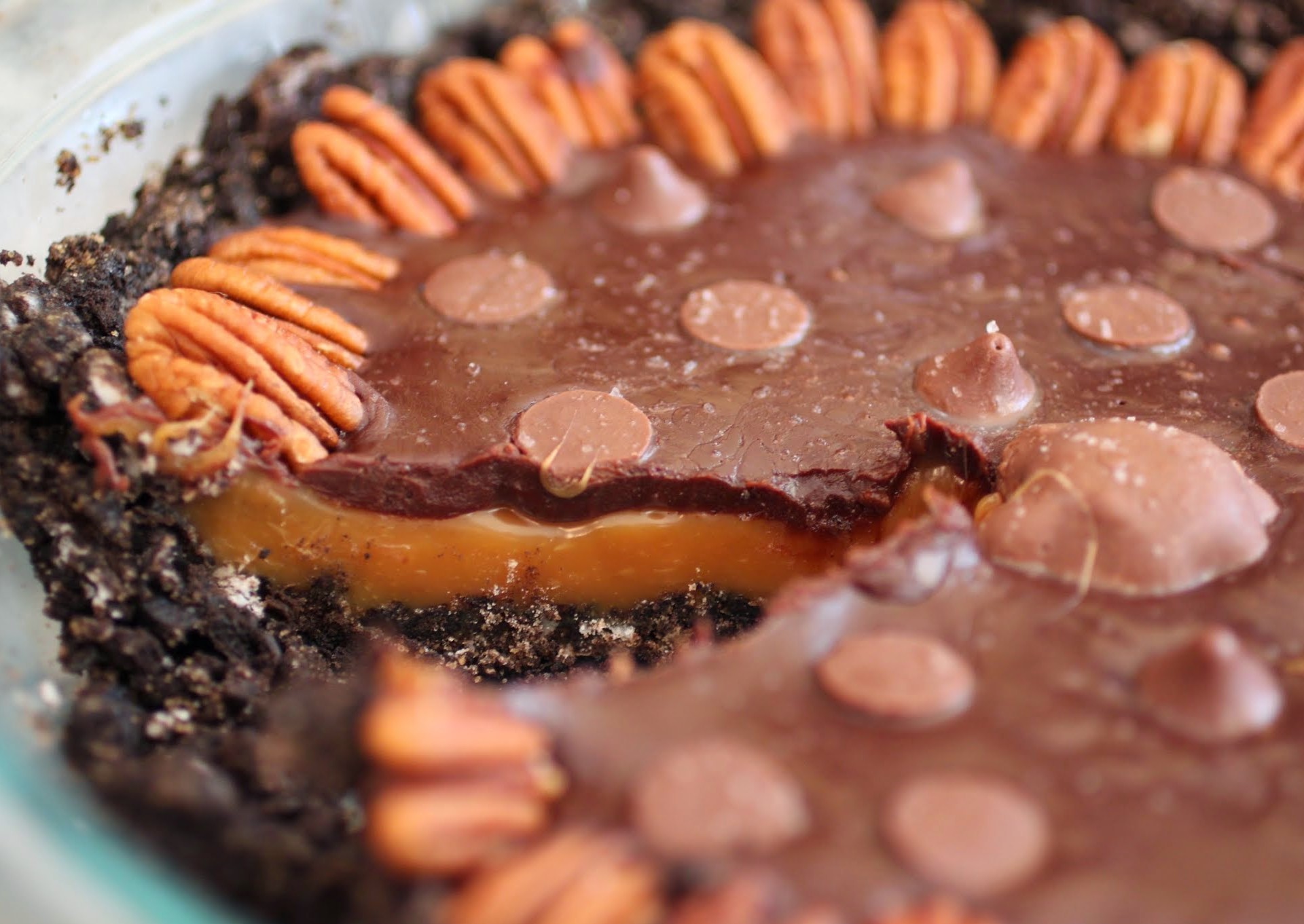 I have a cold. My youngest gave it to me by shoving her fingers in my mouth while she was snotting right and left. See, she never wants me quite so much as she does when she’s sick. Maybe she’s just more attached to Mommy when she’s not feeling well. Or maybe she thinks it’s really funny to get Mommy all sneezy and wheezy.

Diseases terrify me, mainly because my house is like a germ incubator. With three kids running around, we get no break between October and May in the sickness department. For the past few years, I’ve averaged 5 stomach viruses per school year. Colds are nothing in comparison.

Pie season approacheth. Can you tell I teach a lot of Shakespeare? Maybe not.

In my world, pie lives or dies by the crust. In other words, I don’t bother with pies that have mediocre crusts. That’s why this puppy has its own unique pecan shortbread crust. It’s so good.

Pecan pie isn’t something I discovered until my college days, but I’ve made up for plenty of lost time. And I’ve added chocolate to the mix, which is never a problem. At least, not for me. But you can leave it out if you like. Cue my sad face.